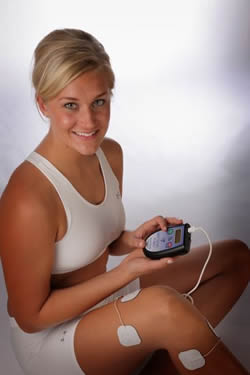 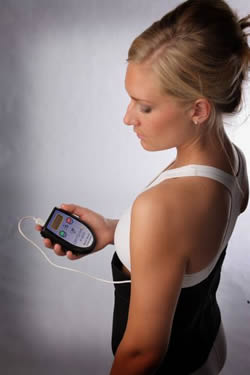 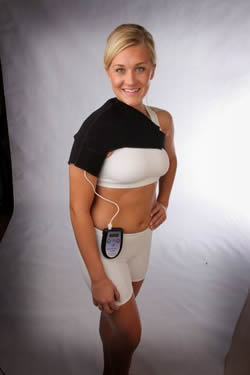 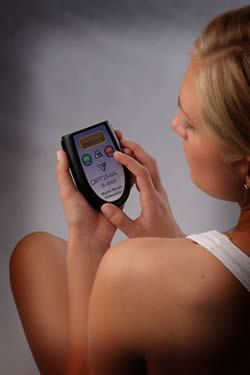 Learn more about the ComfortWave and its treatment options. 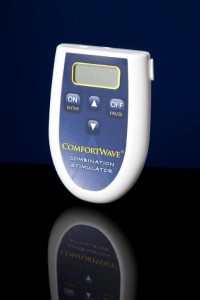 Interferential stimulators are portable, yet full featured devices capable of therapeutic treatment by patients at home or at work. The unit enables the patient to receive numerous treatments without the cost and time needed to achieve the same level of therapy with daily visits to a physician’s office or physical therapy clinic. Interferential stimulators allow several daily treatments, providing more rapid relief and recovery.

Interferential current therapy is an anti-inflammatory-based treatment modality. The interferential stimulator crosses two medium frequency alternating currents which net to a biologically effective spectrum that penetrates deep into soft tissue and bone and produces a wide range of physiological effects. The portable interferential is a system which is used intra-operatively, post-operatively, or as a conservative non-surgical form of patient care. It is important to understand that interferential current therapy is unique in its pain management capabilities and its associated capabilities to control edema, inflammation and muscle spasms, increase blood flow, stimulate soft tissue healing and increase range of motion. An interferential stimulator should not be confused with, or compared to, a TENS unit, muscle stimulator or any other electromedical device, either in the physiological results or cost.

How Does Interferential Therapy Differ From the other Electromedical Devices?

The interferential stimulator minimizes impedance levels in the body by delivering medium frequency current of 4000Hz to 4150Hz. This current has the force to pass through the peripheral layer with very little stimulation of the sensory or motor nerves. This current can penetrate deep within the tissue creating physiological effects at the cellular level. The interferential unit operates on an ionization theory, capable of changing the permeability of the plasma membrane through graded potentials. These graded potentials change the electric potential difference of intracellular fluid enough to allow sodium ions (Na+) to cross the plasma membrane and active transport by activation the Na/K+ pump. The pump will begin to control the concentration gradients of sodium (NA+) and potassium (K+) ions within the interstitial fluid. This activity will directly affect the cell content and force the displaced water to exit the swollen cell which will eliminate edema. Inflammation will also be reduced as sodium (Na+) ion activity increases. The blood proteins which were trapped in the extra cellular fluid will be removed by eliminating the sodium (Na+) ion imbalance and increasing oxygen to the area. The oxygen will remove the bradykinin and histamines which cause instant inflammation and remove prostaglandins, a natural pain substance of the body.

Besides the associated pain relief proven by the reduction of edema and inflammation, the interferential stimulator initiates endorphin release at the cellular level. As sodium (Na+) ion activity increases, an action potential is propagated and travels on the neuron to the receptor site causing 20 different types of neurotransmitters to be released. Endorphin, a morphine-like substance, is one of the neurotransmitters produced which creates an euphoric state and carry over effect of pain relief. The speedy release of endorphins is accomplished with interferential therapy because it is initiated at the cellular level versus motor point therapy or “bulk flow therapy”.

*We define “success” as patients who have been able to resume normal daily activities.

Advanced Therapy Concepts warrants the ComfortWave Stimulator against any defect in materials and workmanship for a period of one year from the date the device is sold to the original purchaser. The serial number of the device is automatically registered at the time of initial sale for record of warranty. This warranty does not cover a device that has been damaged by accident, shipment, dropping, misuse, neglect, improper service, or from any cause not arising out of defect in original materials or workmanship. The warranty does not cover a device that  has been altered in any way or repaired by any other personnel besides the original manufacturer.